The oratory was the first public asset delivered to the community, at the request of the organizers of the traditional Brazilian patron saint festival in the region

This year, the celebration of Our Lady Aparecida of Bento Rodrigues, on October 12, took place in a new house of worship. The community received its first public asset: the new oratory, built on the same site as the old one, which was demolished to make room for the new chapel.

Dedicated to the patron saint of Brazil, the space delighted Bento residents such as Ana Paula Mendes. “I am speechless. We have been waiting for this moment for such a long time. We are so excited and thankful,” she says.

The celebration of Our Lady Aparecida Day is a tradition in the Bento Rodrigues community. This year, the festivities began at 7am, with a mass in the chapel of Santa Cruz in Barro Preto, Mariana. Then the devotees went to the oratory in a motorcade to attend its inauguration. The program continued at the Lavoura site, where Bento Rodrigues is being rebuilt, for a social gathering of future residents. The following day, a party was organized for the children in the resettlement. 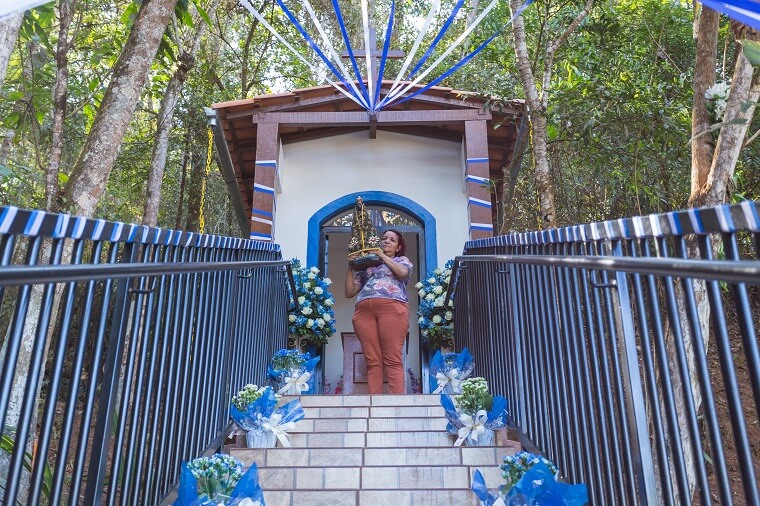 The old structure was replaced by a new oratory, similar to a chapel. The site also received a statue of the patron saint, restored by the Renova Foundation Technical Reserve.

Marinalva Salgado, who participates in the organizing committee of the Feast of Our Lady Aparecida, took the statue to the new altar on the day of the event. “Before, it was just a covered altar, much smaller. We asked for it to be like an oratory, it turned out very beautiful. It was a great joy to carry Our Lady and take her to her spot,” she says.

The delivery of the new oratory is related to an immaterial asset of the community, as explained by Bianca Pataro, Renova Foundation’s Education, Culture and Tourism specialist. She states that the new oratory is important for the continuity of this tradition. “Starting with a delivery related to the celebration of faith is a source of great pride for us, and it really means so much to them, that there is sense in all that is being done. So we start with culture, with the power it has to keep the community together, sharing devotion and memory,” she explains.

Restoration of the statue

The Technical Reserve, created by the Renova Foundation, houses and restores the historical assets found by the field team in the communities hit by the Fundao dam collapse. The statue of Our Lady Aparecida will be delivered to the community of Bento Rodrigues and its place will be in the oratory. It has great religious importance for the devotees of the village.

The young assistant Hiata Meiriane, resident of Bento Rodrigues, participated in the statue’s repair process. “The statue was a bit damaged, so we worked on cleaning and repairing it. The restoration work was very rewarding. Being able to hand it over after all that happened is fantastic, ” she says.

About 2,700 pieces and fragments that were collected in the affected communities are being securely stored by the Renova Foundation Technical Reserve. Many of these items are being restored so that they can return to the new districts as soon as the construction of the resettlements has been completed. This work is extensive and involves archaeologists, restoration technicians and residents of the communities.