Parade passed homes and businesses in the region.

The Paracatu de Baixo community keeps alive the tradition of finding new routes for the three kings to reach the Infant Jesus with the “Folia de Reis” Parade. Between the end of December and the beginning of January, the Christmas Parades visited houses and shops of Monsenhor Horta, Aguas Claras, Furquim, Paracatu de Cima, Borba and Pedras, in the municipality of Mariana (MG), in addition to the temporary houses community and the resettlement construction site. The celebration ended in the Chapel of Santo Antonio in Paracatu de Baixo. 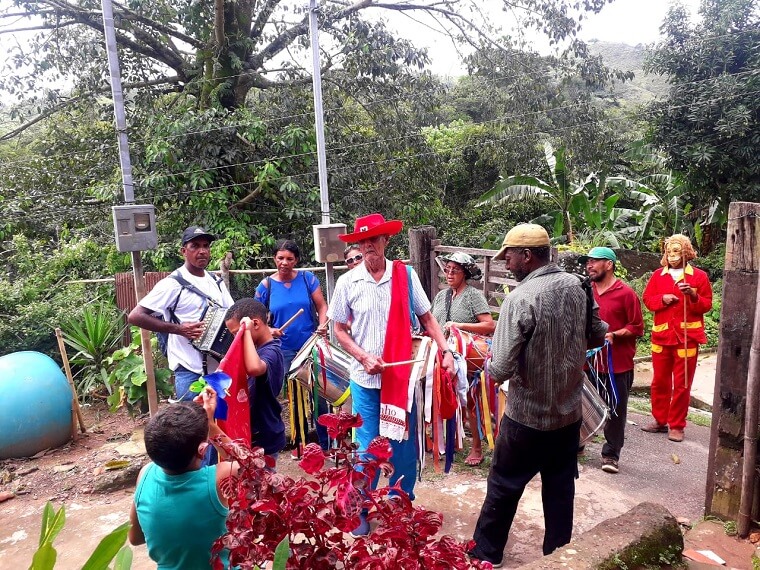 The “Folia de Reis” is a traditional celebration, held by a group of devotees, which has been led for over 50 years by master Jose Patrocinio de Oliveira, known as “Seu Zezinho”. The procession is one of the most important religious and cultural events in the region, and for the first time it took place in the territory that in the future will be occupied by the community.

The Renova Foundation’s Education, Culture and Tourism specialist, Bianca Pataro, calls attention to the importance of the festivity. “The celebration is the continuation of a historical and social memory. It perpetuates the collective, social, symbolic and historical experience of the group”, she explains.

The visit of the Folia parades to other communities that have the same event, promotes cultural exchange between them and strengthens this tradition. The communities of Pedras and Barreto also organize the Folia de Reis parades within their Christmas festivities. In Pedras, Mestre Geraldo Lourenço’s Folia Parade took place between the 2nd and 6th of January. It toured the communities of Cuiaba, Pedras, Borba, Campinas and Barreto. In Barreto, there are two Folia parades: that of Mestre Osorio, known as Folia Nova, which runs from December 27th to January 5th and visits the communities of Pimenta, Serra de Santa Luzia, Aguas Claras, Claudio Manoel, Campinas, Barreto, Munho and Cassava; and Folia Velha, by Mestre Alcides Silva, which leaves the same days and visits the communities of Engenho Fernandes, Goiabeiras, Cuiaba, Borba, Pedras, Campinas and Barreto. The two Folia groups of the community play in the Chapel of Nossa Senhora do Pilar, in Barreto, after midnight on December 24th and 31st and January 5th.

In 2017, the Folia de Reis was declared an Intangible Cultural Heritage of Minas Gerais by the State Council for Cultural Heritage (Conep). The ritual structure, the songs and verses, the instruments used in addition to the locations visited, are elements that promote unity to this type of event. The Folias de Reis, as well as the “Congados, Reinados, Pastorinhas, Marujadas” and their variants, make up the so-called Popular Catholicism.

Currently, Folia groups receive support from the Renova Foundation’s Program for the Preservation of Historical, Cultural and Artistic Memory. The program provides transportation to make the Folia Events and Celebrations of Infant Jesus feasible, enriching the cultural calendar of the municipalities of Mariana and Barra Longa.