The resettlement program’s mission is to restore the ways of life and organization of communities which lost their homes due to the passage of the tailings after the Fundão dam collapse – Bento Rodrigues and Paracatu de Baixo districts in Mariana; Gesteira, in Barra Longa; and the rural communities of the respective municipalities. Its main goal is to ensure the homes and the areas where they will be placed, such as the public facilities meet the needs raised by future residents, preserving their habits, their neighborhood relations and cultural and religious traditions.

THE RESETTLEMENTS OF BENTO RODRIGUES AND PARACATU DE BAIXO, IN MARIANA (MG STATE), TAKE SHAPE WITH THE FIRST HOUSES BEING COMPLETED, IN ITS PAVED STREETS, COLLECTIVE GOODS IN FINAL STAGE, LIGHTED ROADS AND ADVANCED NFRASTRUCTURE WORKS. THE WORKS WERE ADAPTED TO THE COVID-19 SCENERY. ABOUT 470 FAMILIES ACTIVELY PARTICIPATE IN THE PROCESS.

*THE NUMBER OF FAMILIES IN EACH RESETTLEMENT IS ESTIMATED AND CHANGES DUE TO THE POSSIBILITY OF MIGRATING BETWEEN MODALITIES – FROM COLLECTIVE RESETTLEMENT TO FAMILY RESETTLEMENT, FOR EXAMPLE – OR CHOOSING ANOTHER REPAIR FORM.

Measures taken during the COVID-19 pandemic

The reconstruction and recovery of damaged infrastructures in the Mariana and Barra Longa region, in Minas Gerais State, are part of the repair actions undertaken by the Renova Foundation since 2016. Houses, rural properties, schools, bridges, squares, artesian wells and retaining slopes were delivered after extensive work involving demolition, cleaning and removal of waste, rubble and debris resulting from the collapse.

The only municipality with a directly impacted urban area, Barra Longa had its public and private equipments cleaned and restructured.

The water security of the municipalities that have had an impact on the quality and supply of water due to the Fundão dam collapse is one of the fronts on which the Renova Foundation operates. Improvements were made to water treatment plants (ETAs) along the impacted stretch and alternative collection systems were built, which reduce the risk of shortages in 24 municipalities which collected water from the Doce River. Treatment at stations is what makes raw water have the necessary characteristics to be considered suitable for human consumption.

A fundamental action for the revitalization of the Doce River is due to the compensatory measure that foresees the Renova Foundation resources allocation to the municipalities impacted by the tailings for improvement projects in the collection, and treatment of sewage, and the proper disposal of solid waste. Investments can take the Doce River to a level of depollution which has not been seen in years. The initiative is considered fundamental to revitalize the river and improve the health conditions of residents. The forecast is that around 1.5 million people will benefit.

THE INITIATIVE IS ONE OF THE RENOVA FOUNDATION’S MAIN COMPENSATIVE FRONTS, A COUNTERPART TO DAMAGES WHICH RESTORE, MITIGATION, REMEDY AND / OR REPAIR WILL NOT BE POSSIBLE. IT WILL ALSO CONTRIBUTE TO MUNICIPALITIES ACHIEVE THE ESTABLISHED GOALS OF THE NEW LEGAL FRAMEWORK OF BASIC SANITATION, WHICH FORESEES THE UNIVERSALIZATION OF WATER AND SEWAGE SERVICES (COLLECTION OF SEWAGE FOR 90% OF THE POPULATION AND SUPPLY OF DRINKINK WATER TO 99%). DECEMBER 31, 2033.

In the area where the Fundão dam is located, a 40-meter-high dam, called Axis 1, was built to contain part of the rest of the tailings which remains in the reservoir. The construction applied a methodology that aims to provide more resistance to the structure. The completion of the work closes the priority actions carried out since the Fundão collapse, in November 2015, aimed at ensuring the stability of the tailing’s containment structures. 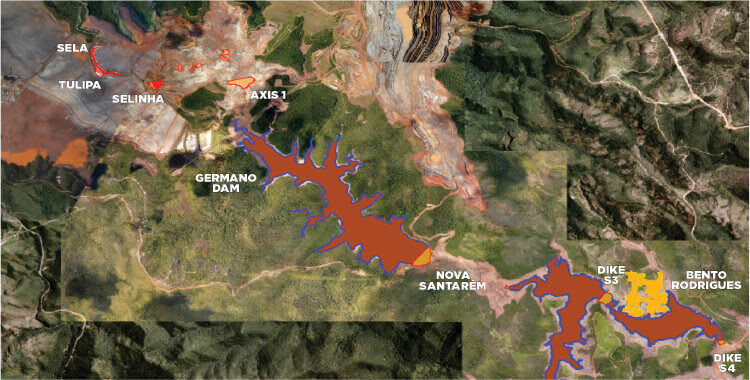