When visiting the new facility built in the municipality, it is possible to ask questions
about alternative water withdrawal

Since September, the Renova Foundation has been organizing visits to the new water withdrawal system in the municipality of Resplendor. The works of the wells have ended, and the population can now see from up close what has been done. There was another visit in February, bringing together councilors, business owners and other representatives from the community. 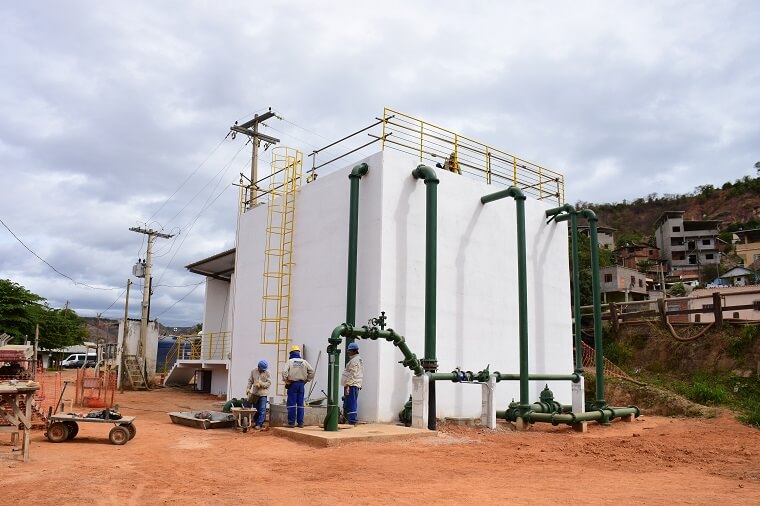 During the visit, it was possible to learn more about the municipality’s water supply system and the new alternative water withdrawal method. “The visits are carried out by the Dialogue team with support from the infrastructure areas and the Improvements to the Water Supply Program. The objective is to disseminate information about the works, in addition to clarifying doubts about the wells, which are ready to start operating”, explains Rafaela Coelho Sexto Alexandre, Social Dialogue analyst at the Renova Foundation.

One of the residents who participated in this activity was the audiovisual producer Gessimar Medeiros. “What was presented is a special facility, a structure completely new to our town. The capacity is huge, so much technology, and the place where the treatment will take place is sensational. I believe that this information has to be passed on to the population, because, you know, I got there a little upset, but I left more at ease. I could see that not everything depends on Renova, but on other competent bodies. I am very satisfied,” he says.

What has been done

The works for the alternative water withdrawal of Resplendor were completed this year, bringing a new source of water to the municipality. There are two wells, located more than 120 meters deep, which have been revitalized and interconnected.

They capture water from reserves formed by rainwater, which seeps between the rocks that make up the subsoil. This alternative form of water withdrawal will be important, especially in times of drought or in case of unforeseen events in the main withdrawal.

Assisted operation will start soon – a period of 90 days in which the Renova Foundation will operate the water withdrawal and treatment system in conjunction with the Sanitation Company of Minas Gerais (Copasa). During this period, it will be possible to verify that everything is working correctly and align operational processes.

The Renova Foundation also built an elevated water storage station and a pipeline, taking the water to the municipality’s water treatment plant (WTP) – which also received improvements and new equipment. The structures will allow the individualized treatment of well water, parallel to the main treatment, ensuring that the water is treated according to its specific characteristics.

It is expected that other visits to the new alternative water withdrawal facility will take place in the coming months. To participate, residents can register at the Resplendor Information and Service Center (ISC), located at Rua Morais de Carvalho, number 831, room 4, Downtown. Dates and times will be defined and informed in advance to those interested.