After the approval of a judicial agreement signed on October 2, families from Mariana who were affected by the collapse of the Fundao dam and who are interested in receiving a proposal by the Mediated Indemnity Program (PIM) can now contact the Renova Foundation to initiate negotiations.

Joining the Mediated Indemnity Program (PIM) is voluntary and practiced throughout the impacted territory, now also serving those affected in Mariana. 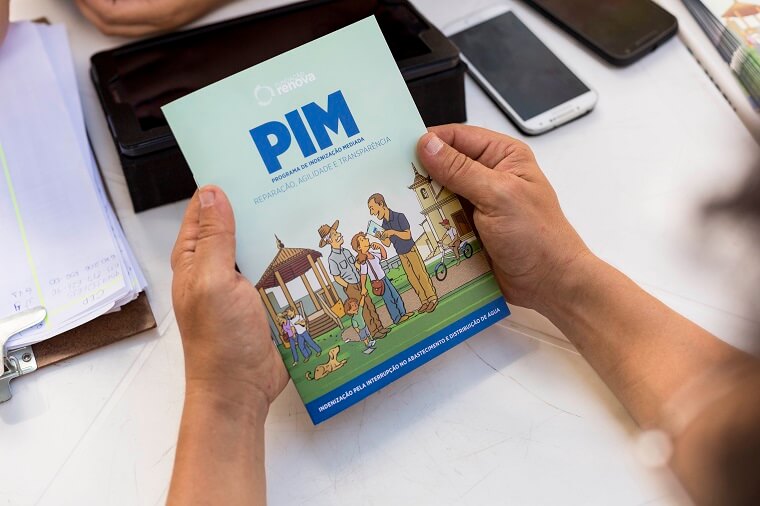 Families that are interested in joining the program can go to the PIM office located at 267 Manoel Leandro Correa Street, downtown, Monday thru Friday, from 8 am to 5 pm. There, those who already completed the steps of filling out the registration form and inspection, are received by teams that are prepared to proceed with the mediations.

The indemnity proposal is calculated individually for each affected person or group and will take into account the particular circumstances of each. If the affected party agrees and accepts the presented proposal, the payments are made within 90 days after the rescission period has ended, which is 10 days counted from the day the Agreement was signed.

To date, in the region from Barra Longa to the Doce River mouth, the Renova Foundation has made more than 7,500 indemnity payments for General Damages, totaling more than R$ 314 million.

The Renova Foundation reaffirms its commitment to repair and compensate those affected by the damages due to the Fundao dam collapse and to indemnify the families that have already been registered and all those that prove to be eligible.

In 2016, several meetings were held in between Barra Longa and Linhares (ES) to survey the damages that occurred, which resulted in the construction of the PIM Damage Matrix, used by the Foundation.

Throughout 2017, dozens of meetings were held with the objective of defining a specific registration model that would meet those affected in the municipality of Mariana. These meetings were attended by representatives of those affected, the Renova Foundation, the technical advisory body Caritas and the Prosecution Service.

Under the terms of the agreement signed with the Prosecution Service on October 2, 2018, those affected may, at any time, start their negotiations with the Renova Foundation, based on the proposal to be presented, the damages reported on the form and in the inspection report.

Those affected who are interested in knowing the proposal by the Renova Foundation, but do not agree with it, can still re-negotiate with the entity after submission of the Registration Dossier by Caritas, which will contain, in addition to the form and the inspection report, two other instruments exclusively applied by the technical advisory body – family mapping and protest.

It is important to remember that the essential steps for presenting the indemnity proposal by the Renova Foundation are the form and the inspection. The registration process conducted by Caritas aims to support those affected throughout the entire reparation process, and not only indemnification.

The agreement also assures those affected the right to use, if they wish, the legal advice of Caritas, the Public Defender’s Office or their private lawyer in the PIM negotiations. Reminding that counseling is not mandatory in the PIM.

Anyone who want to know the Foundation’s proposal should seek contact through any Renova customer relations channel, including its physical offices or the PIM office in Mariana, and request the initiation of the negotiation process.