Gualaxo do Norte, Carmo and Doce

Since November 2015, the waters of the rivers affected by the collapse of the Fundao dam are monitored, first as an emergency measure and, since August 2017, by the Qualitative and Quantitative Systematic Water and Sediment Monitoring Program (PMQQS). There are 92 manual monitoring points and 22 automatic stations. This network was set up at strategic points and monitors water quality developments, identifies trends and substantiates diagnosis. 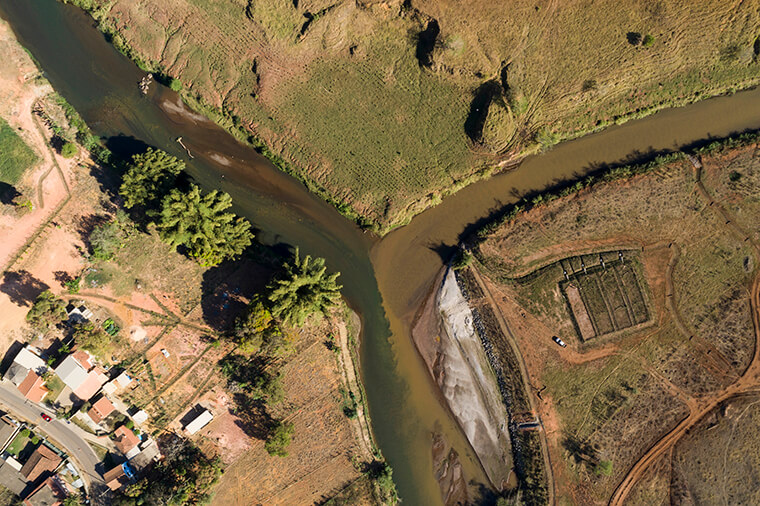 Manual collections are performed on a monthly base. The results measured by the automatic stations are transmitted online, hourly, to public authorities. The program forms an information and alert network. This network supports the preventive planning of the main public water supply systems and also directs the recovery and monitoring actions of the Doce River water quality, increasing the security of information related to water quality. The PMQQS is now the most complete monitoring program in Brazil and its results can be applied to the decision-making by all Technical Boards that support the Interfederative Committee (CIF).

The first partial report of the PMQQS provides a simplified assessment of the surface waters of the rivers Gualaxo do Norte, Carmo and Doce, presenting the results of 15 parameters in 29 monitoring points collected between August 2017 and January 2018.

The first six months of analysis have already shown that the parameters vary according to the time of year, concentrating more in the rainy season, mainly in the month of December. Among the metals and metalloids analyzed, total mercury and total cadmium were not quantified in any of the three evaluated rivers, nor was
dissolved copper in the Gualaxo do Norte River. Between November and January, violations of the legal limits were registered for dissolved iron and total manganese in the three monitored rivers; aluminum dissolved in the Carmo River and Doce River; total zinc and total lead only in the Doce River; and total arsenic only in the Gualaxo do Norte River. The presence of tailings in the banks and river channels contributed to the recorded turbidity and suspended material.

The Complete PMQQS Report will be released in August 2018 and will present an analysis of all physicochemical parameters analyzed in water, sediment and aquatic biota in all 92 analyzed points. In total, there will be over 1.5 million data entries.