The Doce River Panel, coordinated by the International Union for Conservation of Nature (IUCN) advising the Renova Foundation on the recovery efforts of the Doce River Basin, presented data on the environmental importance of natural contact between waters to conserve the ecosystem in the stretch located near the city of Linhares, in Espirito Santo.

Studies from 2016 to 2018 show that the interruption caused by barriers, such as the one of the Pequeno River, can cause considerable and damaging changes to the ecosystem that affect the conservation and restoration of pre-existing natural environmental conditions, including water quality renewal, biodiversity and their sustainability systems. These obstacles make it difficult to switch between waters, sediments and organisms in the natural “source-sea” system. 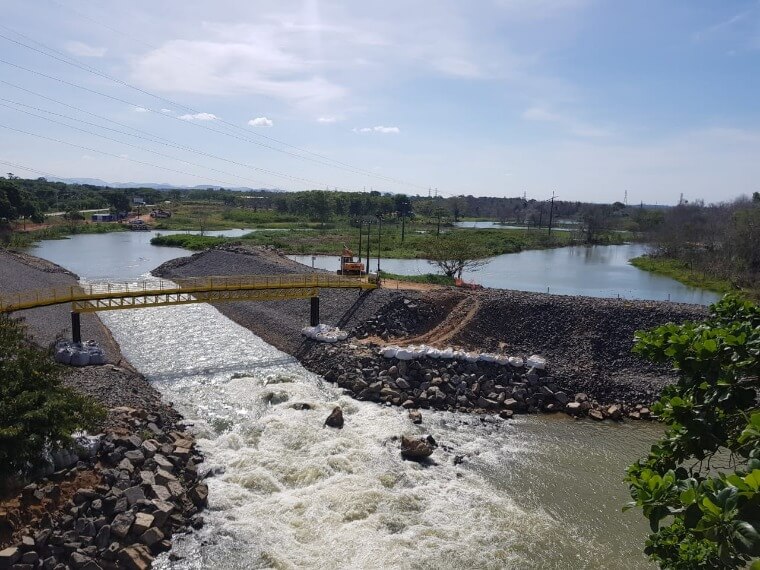 Shortly after the Fundao dam collapsed in 2015, a court ruling ordered the construction of an emergency barrier in the Pequeno River to prevent the tailings that came down the Doce River from contacting the waters of the Juparana Lagoon.

The Juparana Lagoon is the main source of water for three municipalities south of the Doce River: Linhares, Sooretama and Rio Bananal. Initially, as the study points out, it was classified as oligotrophic, due to the predominance of low concentrations of nutrients and organic matter.

Shortly before the dam collapsed, the Juparana had been classified as mesotrophic, characterized by moderate nutrient enrichment, planktonic growth and sediment accumulation, with a tendency to eutrophic conditions due to high levels of nutrient enrichment, planktonic growth, extensive area covered with aquatic plants, large accumulation of sediment at the bottom and low dissolved oxygen levels at the bottom.

Although temporary, the barrier remained installed due to more judicial orders, which aggravated the occurrence of flooding, already common in the region, as well as increasing the concentration of organic matter through the disposal of sewage. To reduce the water level, a canal was built in April 2018 linking the lagoon with the Pequeno River. Before the last rainy season, this canal was expanded and, as a precaution, the 56 families living on Beira-Rio Avenue were temporarily removed.

For the IUCN, the need to construct the artificial canal demonstrated the importance of preserving natural conditions, ensuring the flow of water between the river and its marginal lakes, and the urgent need to look for alternatives to the temporary barrier.

Linked to this issue is the continuous discharge of untreated sewage in the lagoon, along with the impacts caused by coffee, banana, papaya and cocoa plantations in the region, which have brought significant nutrient loads to the Juparana and may alter its natural conditions.

Today, the Doce River is the most monitored in Brazil. Through the Quali-Quantitative Systematic Monitoring Program (PMQQS), 120 physical, chemical and biological parameters are being monitored in 92 monitoring points, 22 of them performed through automatic stations.

Since the first half of 2017, the levels of metals in the Doce River, such as iron, manganese, aluminum, among others, have remained within the normal range, values similar to those found before the dam collapse.

Head of the Water Resources area of the Renova Foundation, Juliana Bedoya, points out that the Doce River’s water quality data are certified by state water resources management agencies, such as the Institute for Water Management of Minas Gerais (Igam).

“Today, the Doce is classified as class 2 by Conama (National Council of the Environment) and this means that the water is apt for human consumption after conventional treatment, for irrigation of vegetables, fruit trees, parks, gardens, sports and recreation fields, places where the public may come into direct contact with the water, etc. Data from the water monitoring program show a significant improvement in the water quality when comparing the situation before and after the Fundao dam collapse. However, the high rate of untreated sewage disposal significantly interferes with the quality of the Doce River water.”

Based on previous studies, which will still be re-evaluated with more recent data, the Panel recommends that the Foundation continues to monitor the water and sediment quality in order to assess the recovery of affected rivers in the face of consolidated information for a definitive solution.

The Renova Foundation has been continuously conducting studies to assess the impacts of the barrier and whether there are viable alternatives that do not cause any new impacts on the environment, and to assess whether contact between the Doce River and Juparana Lagoon may cause any change.

With the objective of revitalizing the Doce River, through sewage sanitation projects and appropriate solid waste disposal, Renova will make R$ 500 million available to 39 districts affected by the Fundao dam collapse to invest in basic sanitation.

Interventions at the barrier
Following the recommendations of the Espirito Santo State Prosecution Service (MPES), the Renova Foundation is carrying out interventions at the Pequeno River canal in Linhares. Work began on June 11, when coffers were installed in the canal between the Pequeno River and the Doce River. The coffers are temporary structures that facilitate the execution of dry works inside the canal, in areas that are submerged. The interventions are part of the first stage planned for conducting the feasibility studies for lowering the canal.

DOCE RIVER PANEL
The Doce River Panel is managed by IUCN, an internationally renowned institution with experience in the management of panels installed in regions hit by relevant environmental impacts, recognized by the scientific community and coordinated by Ecuadorian environmentalist Yolanda Kakabadse.
The Doce River Panel’s activities are divided into several thematic axes, such as strategy, toxicology, impacts on ecosystems, remediation of ecosystems, water management, waste and tailings management, social and economic impacts.

The Panel has a technical, independent and multidisciplinary character and its duty is to deliver recommendations, at different levels and on issues related to the problem. The installation of the Panel is an initiative of the Renova Foundation, due to the complexity, scale and novelty of the environmental tragedy generated by the collapse of the Fundao dam.