Indemnity and financial aid payments more than double in one year and reach R$6.5 billion

In September, the indemnities and Emergency Financial Aids (AFEs) paid by the Renova Foundation to those affected in Minas Gerais and Espírito Santo for damage caused by the collapse of the Fundão dam, in Mariana (MG), reached R$ 6.5 billion. The value represents a growth of more than 100% compared to December 2020.

The Simplified Indemnity System reached the mark of R$3.4 billion paid to 35 thousand people in one year. In September, more than 8 thousand people from Minas Gerais and Espírito Santo were benefited, reaching more than R$ 800 million in payments. The indemnity flow was implemented in August 2020, after the decision of the 12th Federal Court, allowing thousands of the affected population to be included in the indemnity process. Currently, 31 locations in Minas Gerais and Espírito Santo have access to the system.

The Simplified Indemnity System allows categories, often informal, with difficulty in proving damage, such as artisans, carters, washerwomen, subsistence and informal fishermen, sand harvesters and others, to be compensated. The system also compensates formal categories such as professional fishermen, boat owners and companies such as hotels, inns and restaurants.

With the advance of payments, the indemnity process moves towards completion. 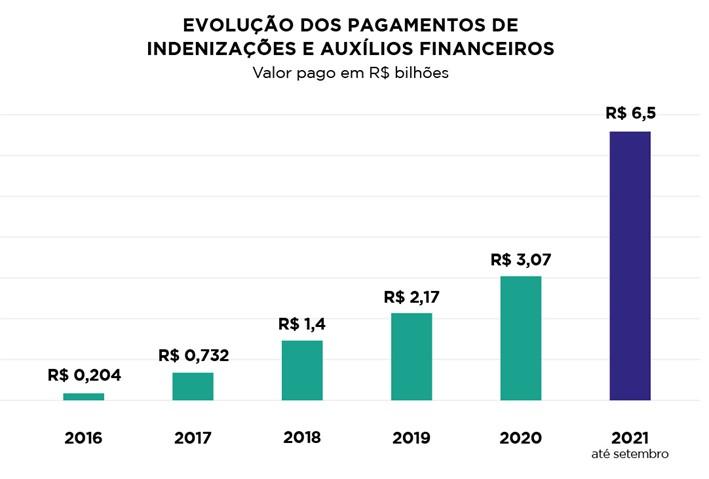 In Minas Gerais, 17.5 thousand affected people from 21 locations received R$ 1.6 billion through the Simplified Indemnity System. The resources paid by the Renova Foundation surpass the amounts collected by the municipalities in 2020. In the municipality of Aimorés, more than 4.6 thousand residents received, in total, R$ 433 million through the indemnity flow, from February to September 2021. In Perpétuo Socorro, known as Cachoeira Escura, in the Belo Oriente district, around R$ 173 million were paid to around 2,000 people. In Naque, in Vale do Rio Doce, 1.8 thousand residents received R$ 135 million through the system, from September 2020 to September this year.

From December 2020 to September 2021, almost 800 residents of Bom Jesus do Galho received around R$ 73 million through the Simplified Indemnity System. Another example is Periquito, a municipality neighboring Governador Valadares. From April to August 2021, 1.2 thousand residents received R$121 million in compensation. In Baguari, district of Governador Valadares, 340 people were compensated and the total amount paid is R$ 26.2 million.

Currently, 31 locations have access to the system. In Minas Gerais, the municipalities are: Ponte Nova, Tumiritinga, Santa Cruz do Escalvado, Naque, Itueta, Galileia, São José do Goiabal, Pingo d’Água, Aimorés, Rio Doce, Bugre, Caratinga, Sem Peixe, Ipaba, Periquito, Resplendor – including the riverside community of Vila Crenaque and except the Indigenous Peoples -, and the districts of Senhora da Penha (Fernandes Tourinho), Ipaba do Paraíso (Santana do Paraíso), Cachoeira Escura (Belo Oriente), Baguari (Governador Valadares) and Revés do Belém (Bom Jesus do Galho), Rio Casca, Dionísio and Mariana. In Espírito Santo, they are the municipalities of São Mateus, Linhares, Aracruz, Conceição da Barra, Baixo Guandu, Colatina and Marilândia. In Rio Casca, Dionísio and Mariana, the deadline for enrollment expires on the 31st of January, 2022. In all others locations, on the 31st of October this year.

Joining the Simplified Indemnity System is optional and must be done through the Attorney’s Portal on the Renova Foundation website www.fundacaorenova.org. To adhere, people must be represented by an attorney or public defender, in compliance with a court decision. In addition, it must be confirmed that the claimant was at least 16 years of age at the time of the dam collapse and that they registered or requested registration in the Renova Foundation database by April 30, 2020.

The criteria for proving damages, the indemnity amounts, the term of adhesion, among others, are also provided for in the verdict. The indemnity amounts, defined by the Court, with a one-off and definitive payment, vary from R$ 17 thousand to R$ 567 thousand. The amounts by damage category can be found on the website of the Renova Foundation.

The Renova Foundation has dedicated teams to handle any possible issues arising when using the platform and is in permanent contact with the claimants’ attorneys by SMS, e-mail or WhatsApp. Attorneys can also call 0800 031 2303 for any questions or concerns.