During the Chocolat – Chocolate and Cocoa Festival, in Linhares, Espírito Santo, a partnership was announced between the Renova Foundation and the Imaflora Institute for a project to support the cocoa production chain in the region.

The project, aimed at small and medium-sized producers, aims to bring solutions for the strengthening and sustainable development of the cocoa production chain, including increasing productivity as a way to increase producer income and sector efficiency. In addition to helping to protect the environment and natural resources, the initiative provides for an increase in the social well-being of producers, workers and their families.

Among the goals is the training of producers in topics such as Management and Commercialization, Sustainable Cocoa Management, Safety and Health and Post-Harvest. The project will also offer theoretical and practical training to 20 technicians and 40 producers. Four demonstration units will be installed on farms that are already cocoa producers. A producer association, selected by the project, will receive support with knowledge exchange. Support will also be given to the holding of two cocoa events: State Cocoa Almond Quality Contest and the Linhares Chocolat Festival.

Find out about the topics covered in the training below:

Imaflora Institute, from Piracicaba (SP), which supports rural cocoa producers in Bahia, Pará and Espírito Santo, will be responsible for conducting and managing the project in Linhares. The Renova Foundation will carry out the transfer of funds, with an estimated budget of over R$1.5 million for the 24-month duration.

The project counts on the involvement of ten more institutions, among them, the Affected Committees, the Rural Unions and CocoaAction Brazil , the World Cocoa Foundation (WCF), which will assume the supervision of the project, aiming to promote sustainability with a focus on the producer. Meet the partners below:

The cocoa culture in Espírito Santo covers more than 2 thousand properties and, according to the Jones dos Santos Neves Institute, in 2019, production generated a gross income of more than R$110 million. The production system has been modernized and sought to help preserve the environment. The very nature of cocoa cultivation favors this objective because it is an agroforestry system that conserves the soil, allows for the infiltration and accumulation of water, as well as serves as a shelter for species of fauna and flora of the Atlantic Forest, one of the most threatened biomes. from the country.

According to IBGE data, in the Systematic Survey of Agricultural Production, cocoa farming occupied, in 2019, an area of 16,993 hectares in Espírito Santo, and the municipality of Linhares is the largest producer in the state, with approximately 80% of production. 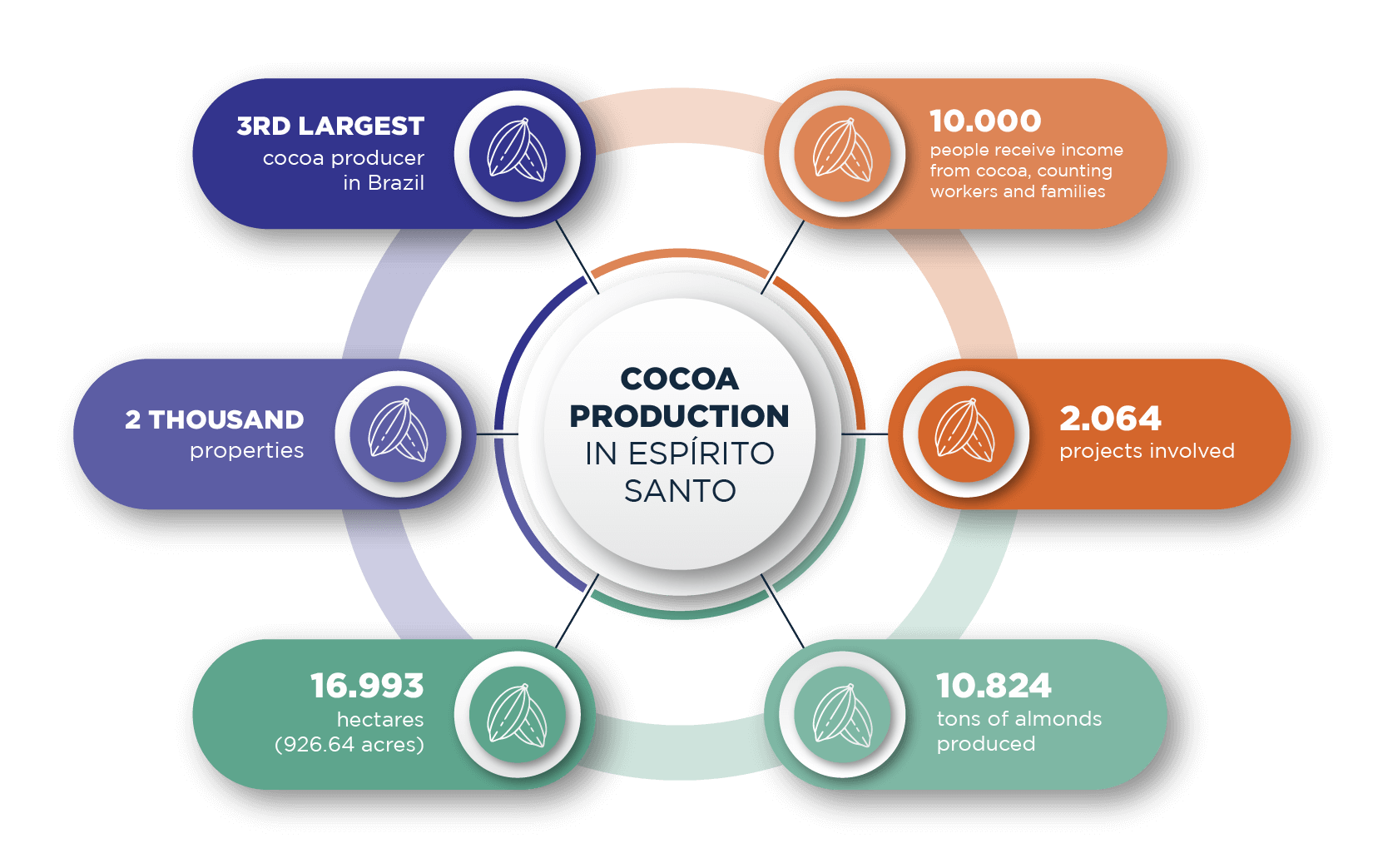