With Christmas approaching, 400 festive wreaths are handed to families hit by the Fundao dam that live in temporary housing in Mariana. The objects were a way of thanking the residents for their participation in the temporary housing improvement survey. Made by impacted artisans from Minas Gerais and Espirito Santo, the pieces are the result of a partnership between the Renova Foundation’s Economy and Innovation program and the General Culture Association (ACG). 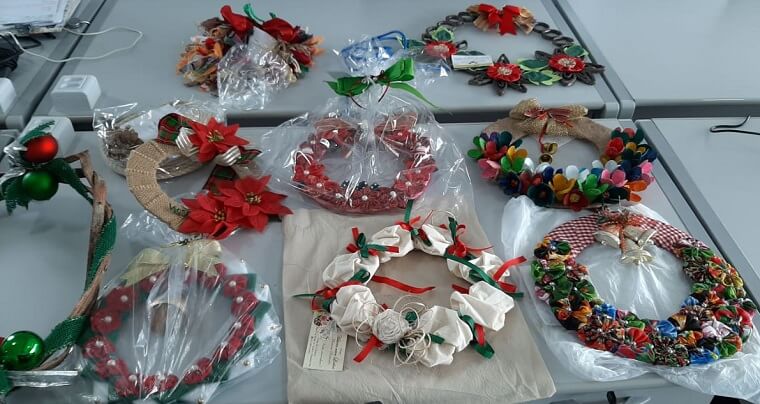 The initiative involved groups of the Catarse Collective from Minas Gerais, which produced 360 garlands, and the craftswoman Olivia Feu from Regencia (ES), who produced 40. The idea is to stimulate new perspectives of development, occupation and income generation for the communities. Technician of the Renova Foundation’s Economy and Innovation program, Jucilene Martins, explains the proposal. “We are carrying out actions that develop and strengthen crafts and agricultural productions, creating creative businesses and adjusted to the needs and expectations of the market,” she says.

For Maria Geralda Martins, member of the group “Claudio Manoel Artisans”, the production of wreaths was a wonderful and motivating experience. “We came together with a lot of excitement, dedication, affection and respect. We really enjoyed the experience. We already have new plans for the group, we will work on quilts next year,” she says.

The Renova Foundation and ACG teamed up to contribute to the local economy and to the territorial development of the communities hit by the Fundao dam collapse. “With the wreaths, we were able to develop collective production, making them aware that this is profitable for all, everyone can win. We produce with a focus on associated production and the creative economy, which is to use the material we have in Mariana,” explains CEO of ACG Mirian Rocha.

The Catarse Collective emerged from the partnership as a way of preserving and promoting cultural art forms of the region, rescuing knowledge and traditions and valuing people who work with crafts. Member of the “Shiny Hands Association”, Sandra Faria, says that the production of wreaths was a challenge, as the group normally works with cleaning products. Raimunda dos Anjos, a member of the “Movimento Renovador”, agrees: “We thought of a sustainable, low-cost product with materials that could be reused.”

Find out more about the groups that make up the Catarse Collective and what they produce: