3 THOUSAND AGREEMENTS ACCEPTED THROUGH THE SIMPLIFIED INDEMNITY SYSTEM IN ONE MONTH, AND OVER 8 THOUSAND SINCE ITS IMPLEMENTATION

Currently, 18 districts have access to the new indemnity system

This week, the Simplified Indemnity System surpassed the mark of 8 thousand accepted agreements. The new payment flow, implemented following the decision by the 12th Federal Court, allows the indemnification of categories with damages caused by the collapse of the Fundao dam (MG) that are hard to prove.

The hard-to-prove cases include categories such as washerwomen, artisans, sand harvesters, scavengers, mineral extractors, subsistence, and informal fishermen, among others. According to the damage category, the settlements are a one-off and definitive payments, as ruled by the Court, and they vary from R$17 thousand to R$567 thousand. Click here to see the amounts for each location.

The speed with which the payments are being processed is increasing steadily. The first payment was carried out at the beginning of September 2020 and, at the end of December, 3.2 thousand payments had been made. At the beginning of February, a total of 5,000 people had been indemnified, and the total sum disbursed was around R$ 450 million. In the first week of March, around 2300 signed agreements were sent for approval, and payments are due in the next few days, exceeding R$ 700 million in indemnities. 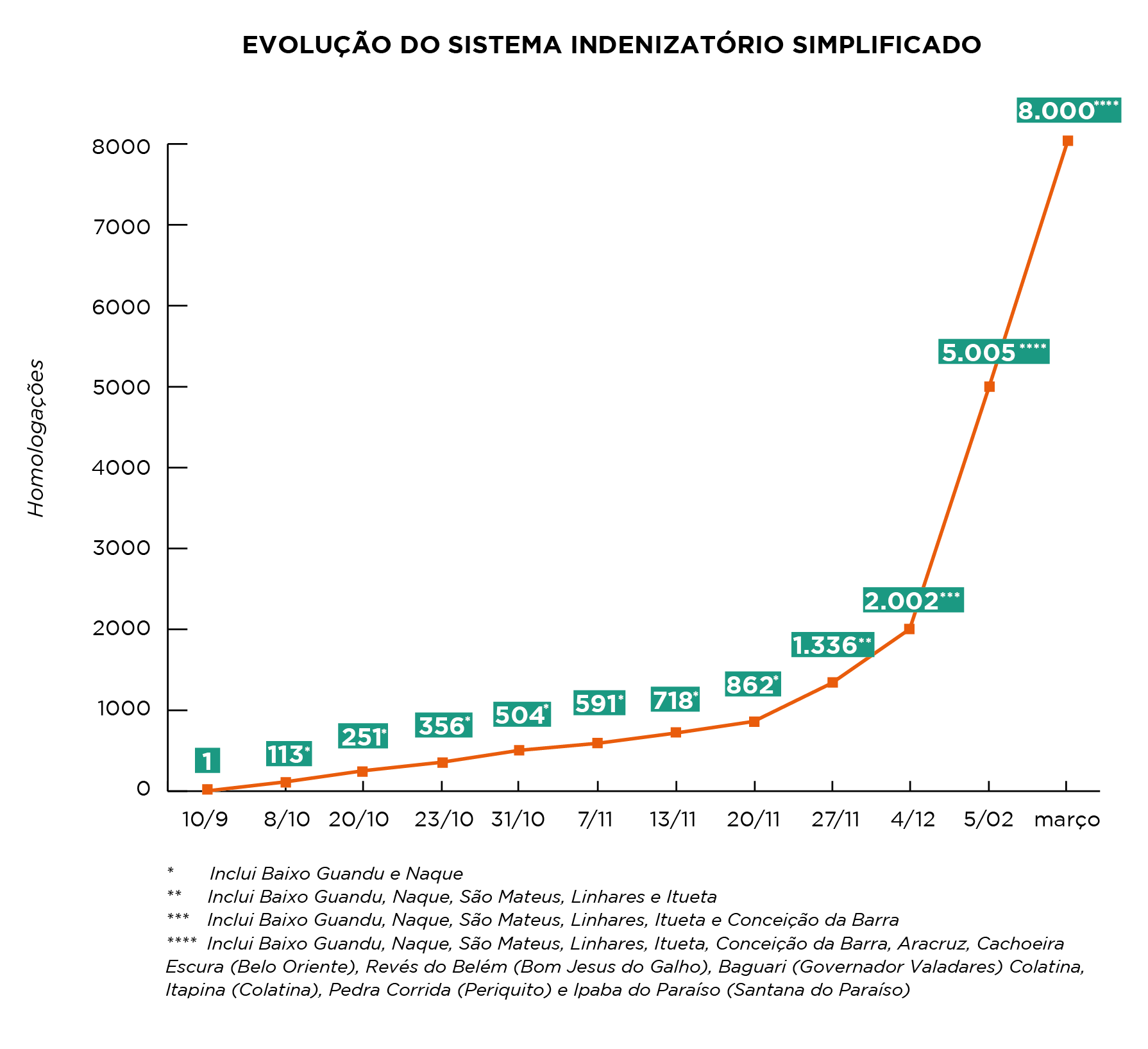 “The numbers show that adherence to the system is increasing every day, and so is the speed of the payments. For 2021, it is expected that more than R$ 2 billion will be disbursed in indemnities and financial aid, exceeding R$ 5 billion”, says Andre de Freitas, CEO of the Renova Foundation.

Currently, 18 locations have access to the Simplified Indemnity System. In Minas Gerais, these are Bugre, Aimores, Rio Doce, Naque, Itueta and the districts of Reves do Belem (Bom Jesus do Galho), Cachoeira Escura (Belo Oriente), Ipaba do Paraiso (Santana do Paraiso), Baguari (Governador Valadares), Pedra Corrida (Periquito) and Senhora da Penha (Fernandes Tourinho). In Espirito Santo, these are Baixo Guandu, Sao Mateus, Aracruz, Conceiçao da Barra, Linhares and Colatina (downtown and the district of Itapina). The Court defined a deadline for adhering to the new payment flow. For Bugre, Aimores, Senhora da Penha, and Rio Doce, the deadline is July 31. For the other locations, the deadline is April 30. Collective actions can be brought forward by the Commissions of Affected Parties from locations that have not yet received a decision.

As of January 2021, R$ 11.89 billion had been disbursed in repair and compensation actions, and a total of R$ 3.26 billion had been paid in indemnities and financial aid to approximately 320 thousand people.

Adherence to the Simplified Indemnity System is optional. It must be done through the Attorney’s Portal platform on the Renova Foundation website (www.fundacaorenova.org) by an attorney or public defender in compliance with the judicial decision. Besides, it must be confirmed that the party was at least 16 years of age at the time of the dam collapse and that they registered or requested registration in the Renova Foundation database by April 30, 2020.

In case you are having any issues using the platform, representatives of the affected parties can call 0800 031 2303 for assistance. The Renova Foundation’s legal department is in continuous contact with the plaintiffs’ attorneys by SMS, e-mail, or WhatsApp.

CLARIFICATION ON PAYMENTS OF THE SIMPLIFIED INDEMNITY SYSTEM