Hotel Xavier, more than 200 years old, is one of the listed buildings in the municipality that will undergo restoration

Historical patrimony in Barra Longa (MG), damaged by the Fundao dam collapse, is being restored. Twelve buildings were listed and inventoried by the municipality and will undergo architectural restoration, — performed by the Renova Foundation, in partnership with the company Hexagon Consultancy and Engineering Project —, after the approval of the projects by the Municipal Council of Cultural Heritage (Compac) of Barra Longa. 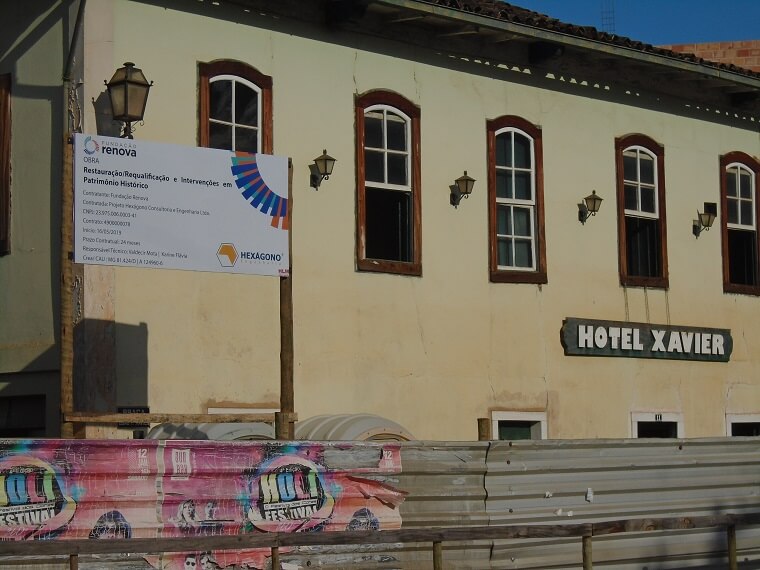 Over 200 years old, Hotel Xavier is one of the properties that will be restored. | Photo: Released

Hotel Xavier is one of the properties that will be restored. The building, over two centuries old, was damaged on its lower part and exterior painting. Since 2016, its doors are closed due to the compromised structure.

Now the project has been approved, restoration of the hotel has begun. The installation of the construction site and the mobilization of workers are in progress, as well as the cleaning, demolition and evaluation of the roof, walls and support structures of the property. The work is expected to take about 18 months to complete. Another property that will be recovered is the mother church Sao Jose de Botas.

The properties were defined according to damage reports, which certify that the cracks that appeared were due to the intense traffic of vehicles used in the repair works. In September 2018, the first pre-projects for restoration and conservation of these assets were created. Currently, some have been nearly completed and some are still in progress.

According to the municipality’s head of Compac, Junia Xavier, any intervention in damaged and inventoried assets is accompanied by the public body. “This is about the preservation of our memory. Barra Longa is a town that is over 300 years old and you can tell its history from its buildings, each with its own architectural characteristics. Preservation of our history is important,” she says.

The restoration of the historical heritage in Barra Longa is part of the Renova Foundation’s Historical, Cultural and Artistic Memory Program. The objective is to recover material and immaterial cultural assets of the communities impacted by the Fundao dam collapse in the municipalities of Mariana, Barra Longa, Rio Doce and Santa Cruz do Escalvado.

According restoration architect Danielle Lima, expert of Renova Foundation’s Memory Program, this repair work goes beyond its owners. “By rescuing the historical and artistic characteristics of the old buildings, we leave a legacy to the entire community,” she says.

OUR LADY OF IMMACULATE CONCEPTION CHURCH, IN CAMARGOS, WILL BE FULLY RESTORED