The third year of the Renova Foundation marks a period of consolidation and important deliveries of the programs for compensation and repair of the damages caused by the Fundao dam collapse in Mariana (MG). Initiation of the construction of houses in the resettlements, the payment of most indemnities and consolidation of the TAC Governance, are among the milestones foreseen for 2019.

This year’s budget increased with 35% compared to 2018 and reached R $ 2.94 billion, reinforcing the continuity of the actions defined by the TTAC (Transaction and Conduct Adjustment Term). Current planning is also supported by the results obtained last year, when 98% of the money allocated to the actions of the programs was deployed.

By 2019, one of the main points of the reparation should be almost completed. About R$ 1 billion will be allocated to the payment of indemnities and emergency financial aid, which alone account for 36% of the program’s budget. So far, up to January, the Renova Foundation has paid R$ 1.4 billion in indemnities and financial aid to around 300 thousand people.

An important milestone this year are the indemnity payments in Mariana, territory that is going through a process that’s different from the other impacted districts. After finalizing the registration by the technical advisory body Caritas, chosen by those affected, it will be possible to negotiate the amounts to be reimbursed by the Foundation. For indemnity payments in this town a budget of R$ 316 million is reserved.

Another R$ 502.5 million will be allocated to the payment of indemnities and financial aid for fishermen, and about R$ 147 million for farmers and other professionals, such as sand harvesters and retailers of the entire Doce River Basin region. 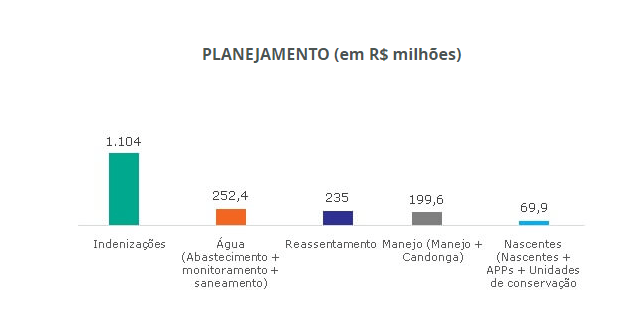 The commitment to redress is reinforced by the amounts set aside for the resettlements, the Foundation’s second largest budget. The construction of the new districts of Bento Rodrigues, Paracatu de Baixo and Gesteira will receive a total of R$ 235 million in 2019.

This year we will start building the houses. Each house is designed according to the wishes and memories of each family, which makes this model of resettlement unique in the world.

Renova’s focus is on the quality of the water with compensation actions throughout the affected territory. Sanitation works will receive about R$ 82 million from the budget, which will allow municipalities that lack sewer system installations to help change the actual situation of the Doce River.

In addition, the Doce River water quality monitoring program will receive R$ 42 million for the continuity of actions that analyze the impact of the tailings. 650 km of rivers and lagoons are being monitored, plus 230 km of estuary. The information, generated through 92 sample collection points, is stored in a database, which can be remotely accessed by public regulatory and inspection agencies. Water from the Doce River can be safely drunk once it is treated, according to the National Water Agency (ANA).

The protection of PPAs (Permanent Protection Areas) and the recovery of springs are also part of the integrated actions to revitalize the Doce River Basin. In the third year of the program, properties in the following towns are to receive these actions: Sabinopolis, Virginopolis, Guanhaes, Governador Valadares and Ponte Nova, in Minas, and Marilandia, Colatina and Linhares, in Espirito Santo.

Tailings Management actions take another step forward with the signing of the Floresta Farm TAC, in February of this year, which allows the continuity of actions in the Risoleta Neves Hydroelectric Power Plant, known as Candonga. The term signed with the Secretariat of Environment and Sustainable Development also determines several compensatory works in the municipality of Rio Doce.

Important progress in the model adopted to deal with the impacts caused by the Fundao dam collapse, the TAC Governance, approved in 2018, should be consolidated this year. This way, the definitions of repair actions will have the broad participation of those affected, who will take part in all bodies of governance of the Renova Foundation.

There is a huge mobilization for the integral repair of the River Doce Basin, based on a permanent and collective construction. The inclusion of those affected in decision-making is the best way to proceed.

The largest contribution of the 2019 Renova Foundation budget will be allocated to the indemnity of those affected. Of the amount forwarded to the actions executed by the entity, 36% will be used for the indemnification program (PIM) and emergency financial aid (AFE), totaling R$ 1.1 billion this year. With this, the total disbursement will reach R$ 2.5 billion.

Because this is such a large-scale process, unprecedented in the world, the payment of damages is one of the greatest challenges of the Renova Foundation. Due to the nature of the damage, the largest amount of indemnification will go to the payment of fishermen and to the implementation of policies for de facto fishermen and subsistence fishermen.

Part of this amount will go to indemnity payments to those affected in Mariana and financial compensation for Water Damage to minors and disabled, whose judicial approvals still continue. The majority of indemnities are expected to be completed by the end of the year.

The policy for De Facto Fishermen broadens the eligibility criteria, allowing the recognition of those who practiced artisanal commercial fishing, but do not have the means to prove the profession due to the high informality of the sector.

In the first phase, the implementation of the pilot project of this policy entails; the community audiences, in order to gather relevant information about artisanal fishermen and their fishing routines; and mapping of the profile of the fishing communities for cartography of the fishing chain. In the second stage, the cases are attended to for a comparative analysis in relation to the information obtained in the previous process. This pilot project is being carried out in the districts of Regencia and Povoacao, in the municipality of Linhares (ES), and in Conselheiro Pena (MG).

For 2019, a disbursement of R$ 316 million is also planned for the payment of indemnities and financial aid to those affected in Mariana. The compensation process in the town is different from the rest of the impacted region, and can only be initiated after an agreement is reached in the Public Civil Action on October 2, 2018. In addition, in Mariana, the affected people themselves chose to indicate the technical advisory body Caritas to carry out the registration work.

Currently, the Renova Foundation is bearing the costs of logistics and infrastructure for the application of registration form 1, scheduled and conducted by Caritas. To date, 890 entries have been completed.

For 2019, important actions are planned for the resettlement of affected districts, which will have available the second largest budget of the planning – R$ 235 million.

In Lavoura, land chosen by the community for the reconstruction of Bento Rodrigues in Mariana, the programmed activities are continuity of infrastructure works (earthworks, installation of sewage networks, distribution of water and energy and paving); initiation construction of the school, service and health post, and houses.

At present, 203 families are being assisted by 37 architects to design the houses. Of these, 132 have completed the project and are in the phase of lot visits. It is estimated that land containment will begin in the second trimester of 2019 and the construction of the housing in the second half. 225 families are planned to be resettled in Lavoura.

In Paracatu de Baixo, after the approval of urban and environmental licensing by municipal bodies, the Foundation will begin plant suppression in the area for infrastructure activities and the construction of houses and facilities for collective use.

The construction site is underway since December. The area is being prepared to receive offices, a cafeteria and an first aid unit for the companies that will work on the site. 140 families will be resettled in Paracatu de Baixo.

For the resettlement of Gesteira, in Barra Longa, the purchase of the land was completed. The area of 40.41 hectares is undergoing land surveying for geotechnical evaluation of the soil and definition of the types of structures that can be installed. In addition to the residences, a church, a parochial hall and a soccer field will be built on site.

The resettlement program has the mission of restoring the livelihoods and organization of communities that have lost their homes due to the passage of tailings sludge. The Renova Foundation will continue to pay for living expenses until the villages and properties are rebuilt.

For this year, service is also planned for the family resettlement and reconstruction in the rural area of Mariana and Barra Longa, modalities that, together with collective resettlement, are included in the guidelines for repairing the right to housing.

So far, 14 families in the rural area of Mariana and Barra Longa have requested the reconstruction of their homes, which takes place on the impacted lands themselves, in accordance with technical norms and engineering standards, with complete infrastructure. The rebuilding of two houses will be completed in the first half of 2019, six projects are under preparation (four in Mariana and two in Barra Longa) and six were delivered at the end of 2018 (five in Mariana and one in Barra Longa).

Seventy-six families requested to be included in the family resettlement, 67 in Mariana, eight in Barra Longa and one in Santa Cruz do Escalvado.

All modalities ensure the restitution of the right to adequate housing, resumption of productive activities, approximation of ways of life and access to the collective assets of the community or households that were removed.