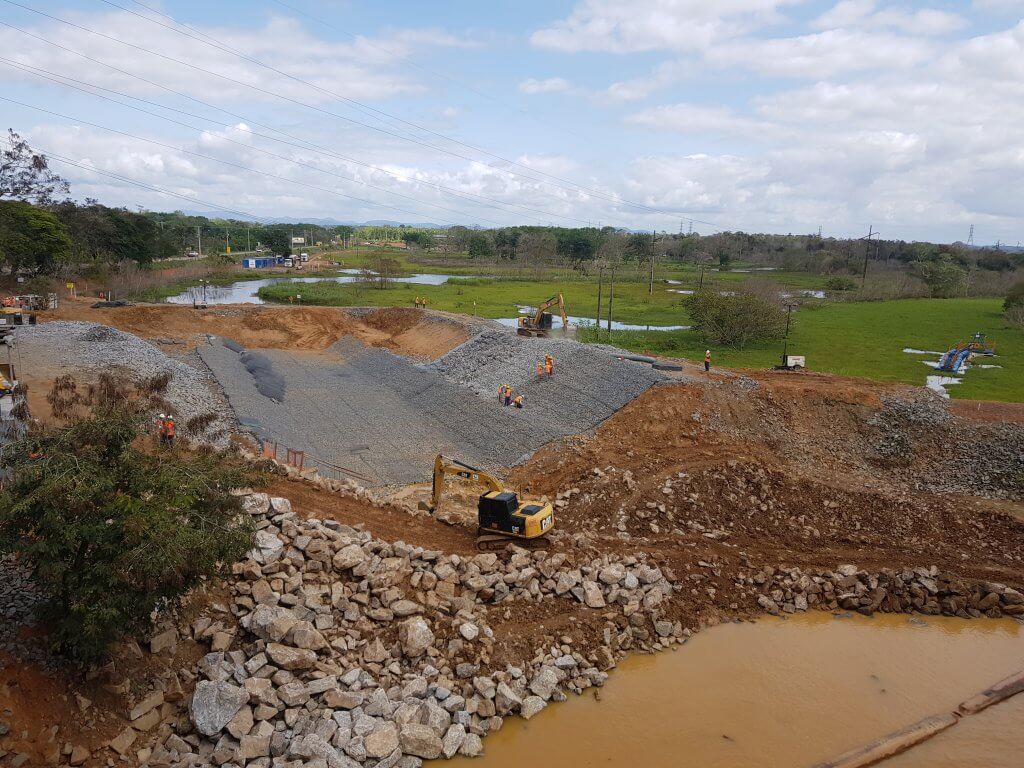 [Updated 09/17/2018] The Renova Foundation reports that the works to deepen the canal for increasing the water flow from the Juparana lagoon to the Pequeno River should be completed this week. The expectation is that, with this measure, the flow will reach 100 m³ per second and that the level of the Juparana lagoon will stay between 6.5 to 7.5 meters when the new rainy season starts. The canal will be opened up in a safe and gradual way.

Works are still being carried out to reinforce the protections on the slopes and the bridge that crosses the Pequeno River for the safety of these structures. The barrier is also being reinforced and a system has been implemented to monitor the level of the Doce river, the Juparana lagoon and the Pequeno river.

As a preventive measure, in partnership with the Linhares Civil Defense, the relocation of families living on the banks of the Pequeno River is underway.

The provisional barrier in the Pequeno river, in Linhares, was erected to protect the Juparana lagoon from the tailings passage that descended along the Doce river in 2015. Although temporary, the barrier remained installed due to judicial decisions, which is making the occurrence of flooding, common in the region, worse.

For this reason, the Renova Foundation has reinforced the monitoring and warnings to the authorities about the risks presented, and is working on short and medium-term actions to solve the situation.

Between January and June 2018, a ship passed through the 10 km stretch of the Pequeno river to remove aquatic vegetation, which had grown excessively due to the accumulation of organic matter and sewage, and dead fish due to the lack of oxygen.

The live fish were rescued and aerators were installed to improve oxygenation of the water. A pump draining 670 liters of sewage per second is kept running 24 hours a day.

The barrier will also be reinforced and the banks will be protected until the bridge. In addition, a monitoring system has been installed to control the flow and level of the Doce river, the Juparana lagoon and the Pequeno river.

Among the scheduled actions is the joint preparation of a contingency plan. Outlined in this document will be the temporary relocation, if needed, of 47 families living on the left bank of the Pequeno River, which depends on evaluation by Civil Defense. Relocation is a maximum precautionary measure for these people to be safe during construction and until the end of the rainy season, predicted for March 2019.

The families will be informed, guided and supported in all their needs and requests, and will be able to choose where their temporary housing will be. The Foundation will make sure that the daily routine of the people stays the same as much as possible. An inspection will also be carried out to identify the current condition of the residences.