The last phase of the regeneration works of the “garden” has started, and reopening is planned for the end of the year.

In agreement with the Mariana Municipal Office, the Renova Foundation announces the gradual reopening of Gomes Freire Square as most stages of the works are concluded. Due to the COVID-19 scenario, the action aims to avoid large gatherings. On December 23, the community will be granted access with the removal of part of the hoarding panels. The lakes’ area will remain closed, and certain activities are still underway, following the necessary security and isolation procedures. 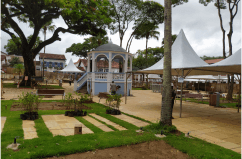 Currently, the civil works are in their final stage. The bandstand was finished on December 15th, and the elevated crossing on Barao de Camargos street, part of the square’s regeneration project, was completed on December 7th. The regeneration of the square is expected to be completed within the first two months of 2021. The Renova Foundation emphasizes that all the necessary environmental licenses and approvals for the regeneration of the square were obtained with the public agencies involved. The National Institute of Historic and Artistic Heritage (Iphan) monitored the interventions carried out on site. The Foundation also emphasizes that it is aware of and evaluating all the public agencies’ recommendations responsible for the patrimony and of the Prosecution Service / Public Prosecution Office of Mariana.

The regeneration consists of sequencing steps that began with listening to the population and designing the project. At this time, the actions have reached the stage that allows the circulation of people as long as they follow social distancing guidelines. Public participation in the square’s regeneration decisions has been a priority in all phases, with public consultations, hearings, and visits. In October, in response to the National Institute of Historic and Artistic Heritage (Iphan) and the Municipal Council of Cultural Heritage (Compat) recommendations, Mariana residents participated in an online vote. They chose the colors blue and white for the bandstand.

The works are carried out by the Renova Foundation and comply with a compensatory measure, based on an agreement with the municipality of Mariana to increase the tourist and socio-economic potential of the region. The interventions include improvements in inclusion and accessibility, lighting, landscaping, and furniture, in addition to the preservation of the lakes and the bridge, considering the historical aspects of the square from the late 19th century