Water supply, tailings management, sanitation and revitalization of springs are among the actions planned for this year

On World Water Day, it’s impossible not to talk about the impacts that mining tailings have caused to the rivers and the recovery of affected areas. The Doce River, which suffered tragedies of this nature, became a reference for damage and recovery. By 2015, about 40 million cubic meters of iron ore tailings leaked from the Fundao dam in Mariana (MG), killing 19 people and compromising and destroying much of the biodiversity and impacting the water quality throughout the entire river basin.

The collapse of the structure has aggravated the degradation of the watercourses, where we know that over the centuries materials have been deposited due to economic exploitation of the affected region – not only by mining activity, but also by industrial and agricultural activities, as well as untreated domestic sewage.

More than three years after the collapse, we can notice the progress in the recovery of the Doce River. Today, it is the most monitored river in Brazil. This year, the water quality continues to be the main focus of Renova, with actions throughout the entire affected territory. Altogether, the program will receive R$ 42 million to continue the monitoring of 650 km of rivers and lagoons, plus 230 km of estuary. The information, generated through 92 sample collection points, is stored in a database, which can be remotely accessed by public regulatory and inspection agencies. Water from the Doce River can be safely consumed once it is treated, according to the National Water Agency (ANA). 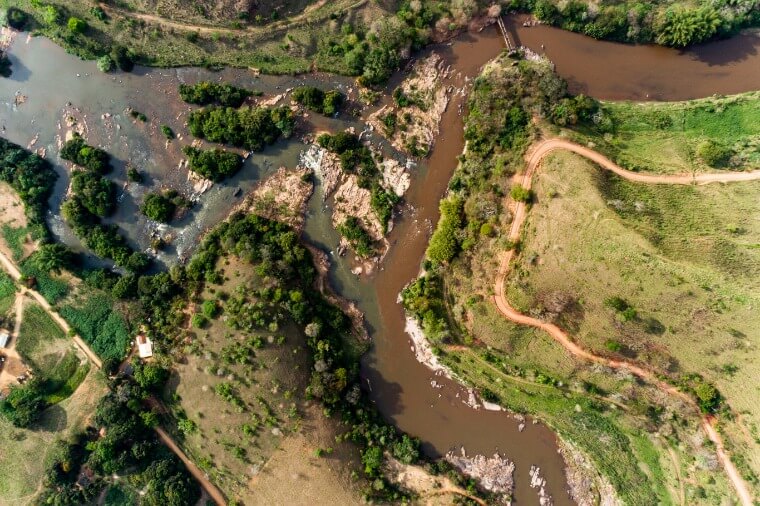 Water supply, tailings management, sanitation and revitalization of springs are among the actions planned for this year. | Photo: Nitro Images

Water security is one of the main concerns of the Renova Foundation. In compliance with the Conduct Adjustment Term (TTAC), the entity is constructing alternative systems for districts that withdraw water directly from the Doce River Channel. For 2019, the foreseen contributions are of R$ 129.2 million and will be allocated to the following actions: completion of the services for drilling and recovery of the tubular wells that will be used for alternative water withdrawal; completion of basic projects and approval by municipalities and operators in Mariana, Barra Longa, Santana do Paraiso, Belo Oriente, Periquito, Fernandes Tourinho, Governador Valadares, Tumiritinga, Baixo Guandu, Marilandia, Linhares; continuity of the execution of works on the water supply systems; completion of works on the SAA in Resplendor and Galileia; hydrogeological studies along the Doce River Basin and coastal zone.

The collective water supply by means of water tank trucks will be maintained in Resplendor, Itueta, Regencia, Baixo Gandu – Mascarenhas and Aimores – Santo Antonio do Rio Doce, distributing 109 million liters per month. Whereas the individual supply is carried out in the territory between the Fundao and Rio Doce; from Candonga downstream to the mouth; Santana do Paraiso – Ipabinha, Entre Rios and Areal, with a distribution of 5.2 million liters per month.

The sewage treatment works will receive nearly R$ 82 million from the total budget of the program – estimated at R$ 500 million –, which will allow municipalities that do not have a sewage treatment structure to help change the situation of the Doce River. According to the Doce River Basin Committee (CBHDoce), 80% of all sewage generated by the municipalities affected by the Fundao collapse does not go through any treatment process and is dumped directly into the river.

The protection of springs, which is of vital importance for the maintenance of the entire river basin, is considered one of the main compensatory actions. This year, the program should invest R$ 20.9 million in the recovery of these water sources. The actions are conducted in an integrated way and are considered fundamental for the revitalization of the Doce River, since it concerns the production of clean water. Receiving these actions are properties in the following towns: Sabinopolis, Virginopolis, Guanhaes, Governador Valadares and Ponte Nova, in Minas, and Marilandia, Colatina and Linhares, in Espirito Santo. The Foundation plans to raise the awareness of rural property owners, as it did in other regions in the first years, in engagement and technical actions that combine environmental protection and increased productivity. So far, more than 1,000 springs have been recovered. For this year, a further 500 are planned. The goal is to revitalize 5,000 by the end of the program.

R$ 70.1 million will be allocated to the Tailings Management front. Among the deliveries are the emergency works during the rainy season; ecological restoration project of the Gualaxo do Norte River, tributary of the Doce affected by tailings and located in Minas Gerais; completion of the recovery works of the Camargos Waterfall (a requested by the community of Mariana); completion of studies on floods in Barra Longa (MG), approval by the environmental agencies of the plans for handling all 17 sections (stretches from the source to the mouth) and implementation of the works in the pilot section, also located on the banks of the Gualaxo.