In the state, most of the resource is destined to the execution of infrastructure works on highways and in public schools

The Renova Foundation concluded the transfer of compensatory resources provided for in the Integrated Agenda agreements signed with 38 municipalities impacted by the collapse of the Fundao (MG) dam and with the governments of Minas Gerais and Espirito Santo. In the state of Espirito Santo, more than R$ 422 million were disbursed for investments in state and municipal public schools and roads.

For Espirito Santo, most of the transfers, in the amount of R$365 million, will be allocated to the infrastructure area for the construction of three road sections at the mouth of the Doce river: ES-010, between Vila do Riacho and Regencia, ES-440, between BR-101 and Regencia, and ES-248, between ES-358 and Povoaçao. In total, the investments will involve works on 153 km of highways in both states.

In the area of education, the application of resources intends to contribute to the quality of life of the affected population, especially children and young people. Investments of around R$ 34.6 million are planned for public education in Espirito Santo.

Resources for education were distributed according to the population of each city. For investments in public education in four municipalities in Espirito Santo, R$23 million were allocated.

See how the resources of the Integrated Agenda will be applied and to find out all the details of the transfers, access the website: https://www.fundacaorenova.org/agenda-integrada/ 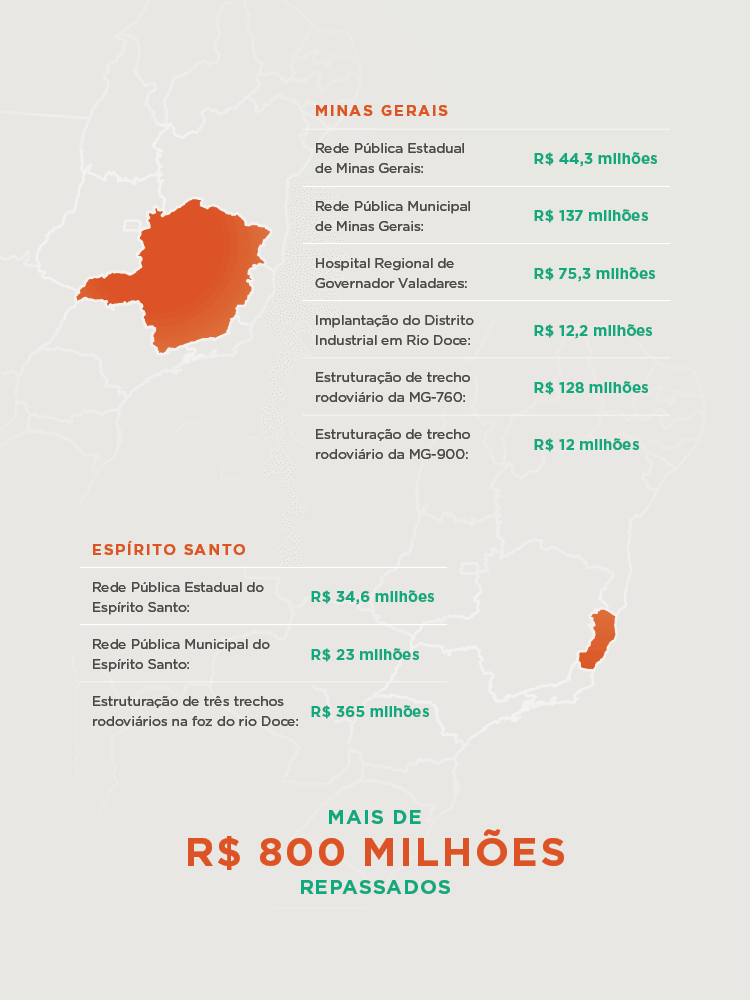 The Integrated Agenda is a joint action between the Renova Foundation, the governments of Minas Gerais and Espírito Santo, with the participation of the Rio Doce Mayors Forum. The initiative allocated the transfers to investments in education, infrastructure and health in the affected region. Deposits began to be made in August of last year, with the first installment, in the AMOUNT of R$ 455.7 million. In January 2021, another R$ 248.5 million was deposited. The third installment, in the amount of R$124.3 million, was deposited in a court held account, within the stipulated period, on July 21st. In total, transfers reached R$ 828.5 million.

According to the court agreement ratified by the 12th Federal Court, the Renova Foundation is responsible for making the judicial deposits of the agreed amounts, so that the foreseen actions are carried out by the corresponding public entities – state and municipal governments. The responsibility for conducting the works lies with these entities. The Renova Foundation is only responsible for transferring the funds, a stage which has now been completed with the deposit of the third installment.