The action was recommended by AECOM, intervening auditor of the Espirito Santo State Prosecution Service (MPES)

The Renova Foundation is installing coffers in the canal that connects the Pequeno River to the Doce River in Linhares (ES). These structures are temporary and serve to facilitate the execution of dry works inside the canal, in submerged areas. The intervention, which started on 06/12, is the first step foreseen in the feasibility studies for lowering the canal and should last about 45 days. The second step is the reinforcement of the barrier structure, which should be ready in October, before the next rainy season. 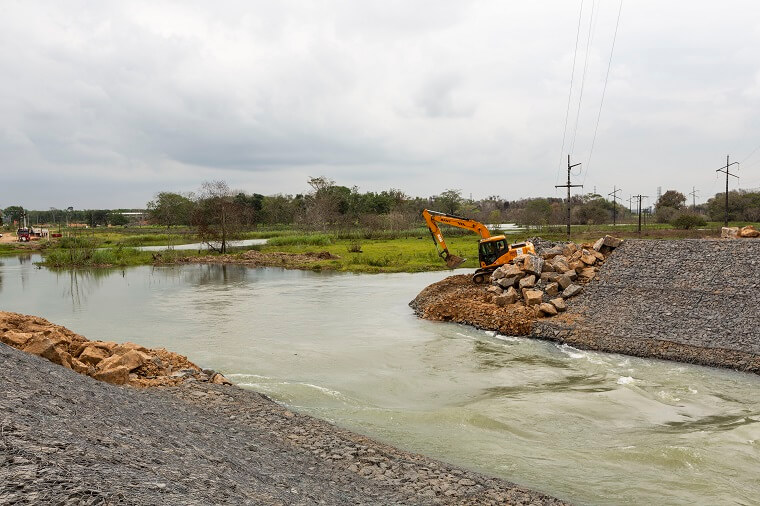 The interventions are divided into two steps, the first one being the lowering of the canal and after that the reinforcement of the barrier. | Photo: Nitro Images

Themag Engineering was contracted by the Renova Foundation, at AECOM’s request, to validate studies carried out by a specialized technical consultancy agency, which pointed to structural risks in the barrier. Themag Engineering reconfirmed the existence of structural problems and recommended the works.

With the installation of the coffers, the canal will be lowered by 1 meter to reduce the water level of the Juparana Lagoon and to reduce the risk of a breach of the barrier and consequent flash flooding in Patrimonio da Lagoa.

During the interventions, the water levels of the Pequeno River and the lagoon should increase due to closure of the canal, but the volume in the coming months should not be significant since this is the dry season – a time of the year when the risk of a breach of the barrier is the lowest ever found.

On 06/07, the Renova Foundation presented information to the Prosecution Service of Espirito Santo and the Public Defender’s Office of Espirito Santo to align with these organs and the Secretariat of Public Safety and Civil Defense that families may return to their homes on Beira-Rio Avenue and about the execution of works at the barrier.

Currently, the level of the Juparana Lagoon is at 7.28 meters and, according to assessment by Themag and AECOM, the risk of a breach of the barrier is low. This means that if families want to return to their homes located on Beira-Rio Avenue they can. The Renova Foundation informs that it will support the decision made by each household, meeting the needs and demands, be it the return to their homes, or staying in temporary housing.

The return of families who choose to go back to their homes will follow an action plan, which will be prepared jointly with the Secretariat of Public Safety and Civil Defense, the Prosecution Service of Espirito Santo and the Public Defender’s Office of Espirito Santo, as well as other municipal and state public agencies and the residents.

The works to lower the canal pose no risks other than those already mentioned in Themag’s report, but there may be some inconvenience caused by noise, dust, moving machinery, equipment and people.

Families who do not want or cannot return to their homes may choose from two types of support: temporary housing rent, paid by the Renova Foundation, or financial compensation. The moving shall be done by a company hired by the Foundation and a property surveillance team will make sure the houses are safe.

Despite the low risk of rupture and/or flash flooding during the interventions, the study points out that there are scenarios in which a collapse should be considered, which can affect homes and put the safety of residents who are on site at risk. In that case, residents may be evacuated again for precautionary reasons. The Renova Foundation and public agencies will provide all necessary support to families.

In Olaria, the only risk is flooding with a low volume of water, without considerable speed to cause torrents. Therefore there is no concern for the residents. In Patrimonio da Lagoa, an increase in the water level of the Juparana Lagoon can be observed, without significant impacts. The contingency plan is already being followed and includes daily water level monitoring. All actions will be kept in place.

Shortly after the Fundao dam collapsed in 2015, a court ruling ordered the construction of an emergency barrier to prevent the tailings that came down the Doce River from contacting the waters of the Juparana Lagoon.

Although temporary, the barrier remained installed due to judicial decisions, making the occurrence of flooding, common in the region, worse. To reduce the water level, a canal was built in 2018 linking the lagoon with the Pequeno River. Before the last rainy season, this canal was expanded and, as a precaution, the 56 families living on Beira-Rio Avenue were temporarily evacuated.

The Linhares barrier is monitored daily, following safety and contingency procedures. The actions of the Foundation to ensure the safety of the structure and the families in its surroundings are carried out by professionals of the areas Infrastructure, Engineering, Dialogue, Health, Social Protection, Environment, Safety and Contingency.

RENOVA FOUNDATION STARTS EVACUATION OF FAMILIES LIVING ON THE BANKS OF THE JUPARANA LAGOON, IN LINHARES (ES)