Last week, the assisted operation of the alternative water withdrawal system in Resplendor (MG) was started. The two artesian wells will be operated by Copasa and assisted by the Renova Foundation for 90 days. During this period, it will be possible to assess the proper functioning of the system and make adjustments to the management processes.

Although the wells are near the Doce River, their waters don’t connect. The river waters are shallow, that is, they do not infiltrate deep into the soil. The wells use groundwater located more than 120 meters deep and formed by the infiltration of rainwater that gets distributed in spaces between the rocks that make up the subsoil, forming reserves called aquifers. This alternative form of water withdrawal is important, especially in times of drought or unforeseen problems in the main water withdrawal. 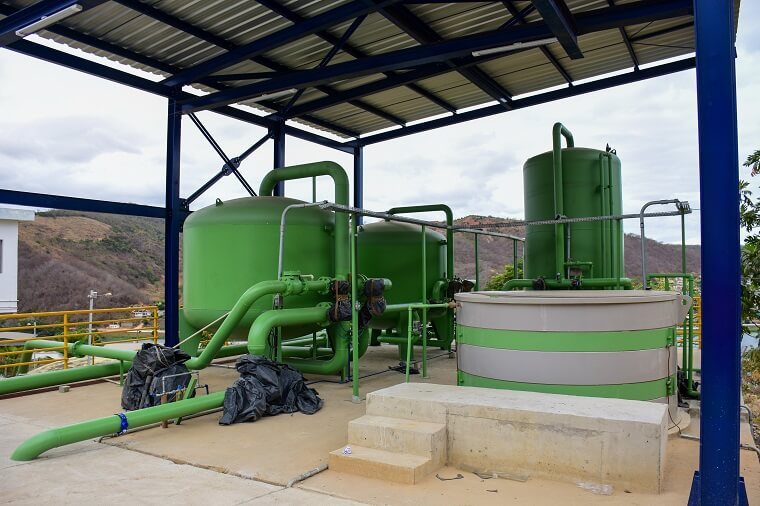 Before the assisted operation was started, commissioning took place. Held between November 2019 and March 2020, it allowed the Municipal Office, the Renova Foundation and Copasa to carry out a series of tests. The results showed that the alternative water withdrawal system is within the water and sanitary safety standards of the competent bodies and is fully operational. All water quality parameters are in accordance with the regulatory rules (Consolidation Ordinance No. 5 of September 28, 2017) of the Ministry of Health.

The Renova Foundation has also been organizing visits to the new water withdrawal system in Resplendor since September 2019, allowing the population to take a closer look at the interventions carried out and learn how the wells are being used to withdrawal water. So far, public executive and legislative officers, business owners, community leaders and other representatives of the community have visited the works.

Deliveries to the municipality

In addition to the revitalization of artesian wells, the Renova Foundation also delivered a pumping station and a pipeline to the municipality, which transport the water from the wells to the water treatment station (ETA). The structures will allow the individualized treatment of well water, parallel to the main treatment, ensuring that the water is treated according to its specific characteristics.

In addition to the alternative water withdrawal from the deep wells, the Renova Foundation has also recovered the system that withdraws water from the Barroso stream. Together, the two water sources will strengthen the municipality’s water security. About R$ 9.5 million reais were invested in the works that will help guarantee about 50% of supply for the municipality.

See what works were done for the alternative water withdrawal system in Resplendor (MG):