MINAS GERAIS AND ESPÍRITO SANTO STATES RECEIVE THE TRANSFERS OF MORE THAN R$ 830 MILLION TO INVEST IN EDUCATION, HEALTHCARE, AND INFRASTRUCTURE.

Approximately R$ 240 million will be forwarded to improve the schools of the municipalities affected by the Fundão dam collapse.

An integrated action between Renova Foundation, Minas Gerais and Espírito Santo State Governments, with the participation of Doce River Mayors Forum, is allocating more than R$ 830 million to investments in education, infrastructure and healthcare in the region impacted by the Fundão dam collapse. The funds will be used for the creation of the Industrial District of Doce River (MG State), the restructuring of 153 km of roads and 900 schools, in addition to the conclusion of the construction works of the Regional Hospital of Governador Valadares (MG State).
In early 2021, Renova Foundation deposited in Court the second transfer of compensatory funds to the project, in the amount of R$ 249 million. Deposits are being carried out along with the 12th Federal Court, according to the agreement’s schedule. So far, R$ 705 million has been deposited, 85% of the total amount expected. The remaining amount, of R$ 125 million, will be deposited in the judicial accounts of the states and City Halls in the second half of 2021.

According to the judicial agreement approved at the 12th Federal Court, in Belo Horizonte City, Renova Foundation is responsible for making judicial deposits of the agreed amounts, so the actions foreseen by the integrated action can be conducted by the corresponding public entities. The release of funds for the execution of the works is carried out by the court decision of the 12th Federal Court, being based on the execution schedules of the works presented by the states of Minas Gerais and Espírito Santo and by the City Halls. Renova’s compensatory resources are being directed to projects with collective and long-term impact in the Doce River basin and were approved by the Inter-federative Committee (CIF).

CHECK OUT HOW THE FUNDS WILL BE DISTRIBUTED 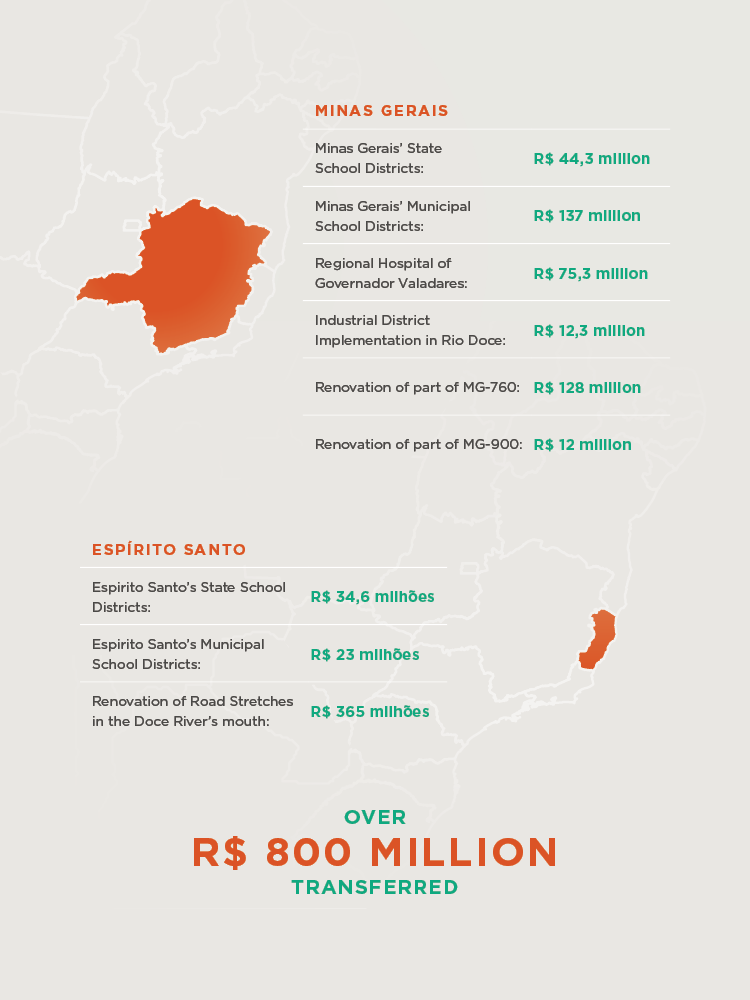 In-state schools, the funds will be used to carry out works such as expansions, renovations, and construction of sports fields, updating of computer rooms, purchase and refurbishing of school furniture, purchase of vehicles, and improvement of professional education labs. Of this total budget, Minas Gerais will receive investments in the order of R$ 44.3 million, while Espirito Santo will have R$ 34.6 million at its disposal.

For the municipal schools, funds will be distributed according to the population of each town. The amount will be invested in the construction and renovation of daycare centers, preschools, and elementary schools, in the refurbishment of school furniture and vehicles, in addition to consulting for strategic management in education. R$ 137 million will be allocated to schools in up to 35 municipalities in Minas Gerais and R$ 23 million to schools in 4 municipalities in Espirito Santo.

The funds allocated to education actions aim to improve the quality of life of the people affected by the Fundao dam collapse, especially children and young people, and contribute to a legacy of sustainable and inclusive development in the Doce River Basin.

The other projects that make up the Integrated Agenda in the states of Minas Gerais and Espirito Santo have the potential to diversify the local economy, attract investments, and generate jobs and income. They will also facilitate access to important tourist hubs, such as the coast of Espirito Santo and the Doce River State Park in Minas Gerais, and favor the displacement of people and local and regional production flow.

Funds will be made available for road work along 153 km of highways in Minas Gerais and Espirito Santo. R$ 140 million will be transferred to the government of Minas Gerais of which R$ 12 million will be used to renovate the MG-900 section to access the Doce River State Park (Bispo) and R$ 128 million to renew the section from MG-760, between BR-262 and Sao Jose do Goiabal – Cava Grande, which connects the Doce River Valley to the Zona da Mata region in Minas Gerais.

In Espirito Santo, R$ 365 million will be allocated for the execution of three road sections that give access to the Doce River mouth: ES-010, between Vila do Riacho and Regencia, ES-440, between BR-101 and Regencia, and ES-248, between ES-358 and Povoaçao.

To diversify the local economy, another R$ 12.2 million will be allocated to the municipality of Rio Doce, in Minas Gerais, to implement the Industrial District of Rio Doce, with an estimated area of 5,500 square meters.

Among the projects is the renovation of the Regional Hospital of Governador Valadares, located in the Health Macro-Region of Eastern Minas Gerais, which covers 86 municipalities and an estimated population of 1.5 million inhabitants. The government of Minas Gerais will receive R$ 75.3 million to proceed with the second stage of the construction and acquisition of equipment for the hospital, which will have 265 beds of which 176 general hospital beds, 39 for ER, and 50 for IC, in addition to 9 for operating rooms.